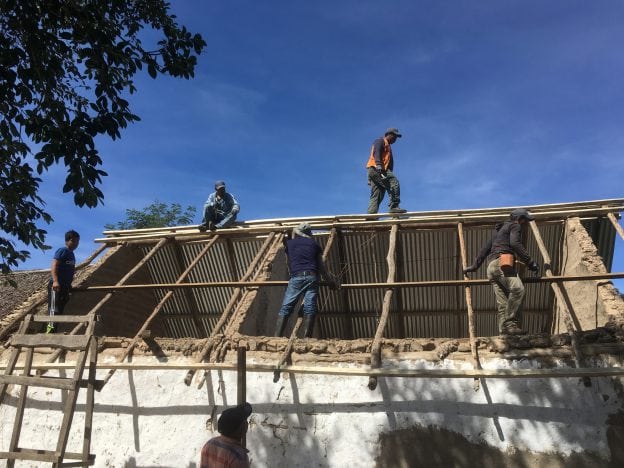 In June 2017 NAVMC helped to fund a construction project in Palacios, Bolivia. The team removed the commonly used thatch roofs in favor of corrugated metal ones. The new roofs serve to reduce the spread of Chagas Disease in the village. Chagas is a chronic condition caused by a parasitic protozoa resulting in severe heart and intestinal problems. Our surgical team encounters many patients living with the long term effects of this undertreated, chronic, and all too common disease. Large quantities of the “kissing bug”, which are the vector for the spread of Chagas, live in the thatch. The homes were chosen for the project specifically because they house young children. Unfortunately most adults in the village have already contracted Chagas.

This project used an all Bolivian construction crew with two American foreman. The American volunteers paid all travel, lodging and food expenses while in Bolivia. They not only relied on the hard work of their Bolivian crew, but taught them many new constructions skills. A typical workday lasted 10-12 hours. Eleven homes were completed in just a week. That is eleven families whose young children will hopefully never know the effects of Chagas. The lasting effects of this worthwhile project will be felt for generations. Way to go JP and Dave!