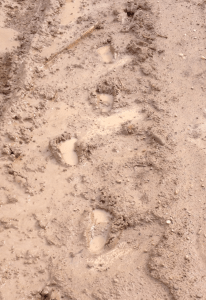 When it rains in Palacios, a small rural community a 30 minute drive from the nearest paved road, everything turns to mud. The roads, which were almost entirely made up of dust the day before, fill up with pools upon pools of water, with the occasional mud pile to remind you of the road that once existed there. Life within the community slows. Motorcycles, the main form of transportation, cannot pass the roads. Cars slip and slide until they end up in a ditch on either side of the road, waiting for a tractor to pull them out. Commuting becomes near impossible.

It was on a road such as this that my sister and I were carefully navigating our SUV. We had just finished seeing patients for clinic in a community member’s house and were returning to the actual clinic, a building another 20 minute drive from Palacios down a near-impassible road. Along the way, we passed a sullen group of 3 children, slowly trudging down the road. One was a teenager, another around 12 years, and the last one around 4 years. We slowed down to offer them a ride to the furthest point our car could pass, a bridge a few minutes away. They gratefully accepted. When we arrived at the bridge, they all regretfully got out of the car and continued to walk down the road. My sister and I took a bit more time collecting our things and putting on our boots, so that by the time we started walking down the road, they were too far ahead of us to see them. A few minutes passed, filled with us concentrating on putting one foot in front of the other without losing our balance or our boots. The earth sunk beneath us with each step, our shoes getting more and more laden with mud. Then, I saw it. First one, then another, then another. A bit further down the road, I saw some more. And I suddenly realized why these children so desperately did not want to leave the car. 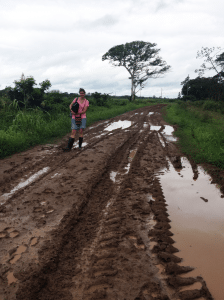 Footprints. I had seen bare footprints of a small child. And the sight made me freeze. I had not even taken the time to look at the feet of these children, not even thought of the possibility of them not having shoes, yet here were tiny bare feet traipsing through the mud. I could have offered them something if I had known- plastic bags, my extra pair of shoes, a piggyback ride- but instead, I just let them go, too busy putting on my own heavy duty impenetrable rubber boots to notice that they were facing that same road with nothing on their feet. This mud we were walking through was not just an inconvenience; hidden deep within its endless layers were parasites and insects of all varieties. The best of the jungle comes out into the open right after a rainstorm to graciously pass on a wide array of molestations and diseases to the human race. And I could not bear the thought of one of those children arriving at their destination with a new illness.

The next day, after a little research, we discovered where these children lived, and gave them shoes. They were thrilled, and immediately slipped them on. The feet of these children are important, more important than we realize. Every disease that is prevented by wearing shoes removes one more obstacle in the way of a good education, a stable income, a promising future, a way out of poverty. It may seem like a small contribution, a pair of shoes for the barefoot child. Yet their future needs to start somewhere, somehow. And what better place for it to start than with their feet.